Since the early days of the war, Rinat Akhmetov and Vadym Novynskyi’s Metinvest has channelled all resources into bringing Ukraine’s victory closer. The steelworkers, miners and repair workers of the Group’s enterprises have been holding the line, showing resilience through their own “Steel Front”. Overall, Metinvest has donated more than UAH1.7 billion to support the army, the national economy, employees and civilians

“Metinvest’s Steel Front is a contribution to our joint victory and the future of Ukraine. The Group’s steel, which features in hundreds of thousands of armour vests, is protecting the lives of our soldiers who are defending Ukraine’s sovereignty. Metinvest’s steel has formed the backbone of tens of thousands of shelters, anti-tank hedgehogs and fortifications, which help to stop the aggressor. We will walk the path to victory together and, after victory, we will rebuild everything that was destroyed together.”

The key areas of the “Steel Front” are the army, the economy, team and help.

Metinvest has been donating modern equipment for the armed forces of Ukraine, territorial defence units, national guards, the national police, the defence intelligence corps and other forces. In particular, the defenders will receive 100,000 armour vests. Most of the equipment is produced from the Group’s certified special steel, and the rest is procured abroad.

Almost 60,000 anti-tank hedgehogs and 20,000 anti-vehicle spiked strips have been made using Metinvest’s steel. The Group has donated 20 tonnes of wire rod to make mobile strongholds and around 3,000 tonnes of sand and crushed stone, as well as 2,400 reinforced concrete blocks and plates to create checkpoints and protect social infrastructure facilities.

Another initiative is to supply armour vests and helmets for mobilised employees of Metinvest from Kryvyi Rih, Kamianske, Zaporizhzhia, Pokrovsk and Avdiivka, as well as for personnel from public utilities in the front-line cities and towns where the Group’s businesses operate. These brave men have already received more than 2,200 kits consisting of armour vests and helmets.

Since the beginning of the war, Metinvest has had to rebuild its business and find new logistics routes and suppliers of raw materials for its enterprises to continue their operations to the extent possible.

In response to Russia’s invasion of Ukraine, the Group hot-mothballed several assets (including the steelworks in Mariupol and Avdiivka Coke), which resulted in the suspension of their production. Enterprises and city infrastructure have been shelled. Until the active stage of the war is over and reliable communication channels with the steelworks in Mariupol are restored, it is not possible to assess the impact of the hostilities on Metinvest’s plants. A separate focus is on combating piracy by Russia, which is trying to take 234,000 tonnes of the Group’s steel from Mariupol. Metinvest has been making every effort to bring those responsible and their accomplices to justice. In particular, the Group has approached the cabinet of ministers with a proposal to impose sanctions against all those involved in this plundering.

The economic situation is complicated: rising production costs, falling prices and lower demand for products have been accompanied by logistical problems. Traditional Black Sea ports for export are blocked, and the throughput capacity of railway border crossings to the west does not meet the demand for transportation. In addition, Ukrainian railway tariffs remain quite high. Government regulatory support can help to restore the industry’s ability to hold the economic front.

In July 2022, Metinvest suspended ore mining at the Kryvyi Rih enterprises: Ingulets GOK, Northern GOK and Southern GOK. Central GOK is operating at reduced capacity. By the time of the shutdown, production was at around 40% of last year’s level. The Group is striving to keep the people of the enterprises employed and is involving thousands of them in repair and maintenance work and landscaping while maintaining basic earnings.

One blast furnace is currently operating at the Kamet Steel metallurgical plant. At the same time, the enterprise has launched two new types of products: MP-4 rolled section and coal-tar varnish.

The capacity utilisation of the Zaporizhstal joint venture is around 50%: a sinter plant, two of four blast furnaces and a smelting furnace are in operation.

To protect the lives of employees who keep daily production running, Group enterprises have set up bomb shelters. They are equipped with supplies of water, long-life products, medicines and communications.

Metinvest is offering comprehensive support to all employees who were evacuated from Mariupol and Avdiivka to the territory controlled by Ukraine. In particular, the Group has prepared more than 6,000 temporary accommodation places in its social facilities, is providing people with food and is distributing food and hygiene kits.

Over 1,000 forcibly displaced people have turned to the rehabilitation and reintegration centres that continue to operate in Zaporizhzhia and Kamianske.

Metinvest is also helping employees of its Mariupol plants to find work. The Group is offering more than 1,800 vacancies at its enterprises in Zaporizhzhia, Kryvyi Rih, Kamianske and Pokrovsk to all of those who are willing and have left or intend to leave the occupied city. In addition, Metinvest is offering free training in the most sought-after professions and the possibility of further employment. For this purpose, the Group will provide 2,000 places at its assets in Zaporizhzhia, Kryvyi Rih, Kamianske and Pokrovsk. Employees willing to take training or work at Metinvest enterprises will receive substantial financial support from the Group through various compensations, social benefits, humanitarian aid and a guaranteed salary. At present, almost 1,000 internal refugees have received employment at Metinvest enterprises.

For the Group’s employees and their family members, the Metinvest Together service, which provides free psychological support, is available. To date, it has provided over 500 individual and group consultations.

The Group has also launched the “Home for Our People” corporate programme. Metinvest has asked employees to open their homes to colleagues for temporary accommodation. The Group is providing financial support to all programme participants of UAH3,000 for three months. Since the end of April, more than 160 employees have helped.

Civilians in Ukraine are suffering from not only shelling and bombardments, but also a lack of access to food, water, essential items and medicines. To prevent a humanitarian catastrophe, Metinvest and DTEK, in coordination with the Rinat Akhmetov Foundation, have created the Saving Lives project.

Since the beginning of the war, almost 126,000 Ukrainians have already received aid from Europe. They include refugees, residents of de-occupied territories, vulnerable segments of the population, families of mobilised employees of Metinvest and privileged categories of employees, as well as veterans of Group enterprises.

In addition to the cities of presence where distribution centres are located, support packages are also being sent to other regions, particularly rural communities. In June, a humanitarian shipment of food was delivered to the Kherson region: 2,000 packages were received by residents of the de-occupied villages of the Kochubeevskaya community, which continue to have problems with stable supplies of goods.

In addition to food, the project is providing people with hygiene and essential items. Also, as part of the Saving Lives project, medicine and consumables worth EUR238,000 were delivered to hospitals in Zaporizhzhia and Kamianske.

Alongside the main businesses in the System Capital Management holding, the project is supported by over 90 donor companies from all over the world.

Under a medical programme implemented by Metinvest, the Rinat Akhmetov Foundation and the Ministry of Health, hospitals in Zaporizhzhia, Kryvyi Rih, Kamianske, Pokrovsk and Avdiivka have received medicines and equipment worth more than UAH65 million.

Despite the hostilities, Metinvest enterprises continue to donate oxygen for patients with coronavirus free of charge. Over six months, Ukrainian hospitals received 1,072 tonnes of oxygen from the plants.

The Vadym Novynskyi Foundation has set a goal to deliver at least 100 ambulances to regions close to the hostilities. Some vehicles are already saving the lives of Ukrainians.

Metinvest is also helping to equip places for temporary shelters for refugees. In particular, in June, the Group donated UAH2.8 million for building materials, household appliances and other materials to communities in the Dnipropetrovsk and Kirovograd regions 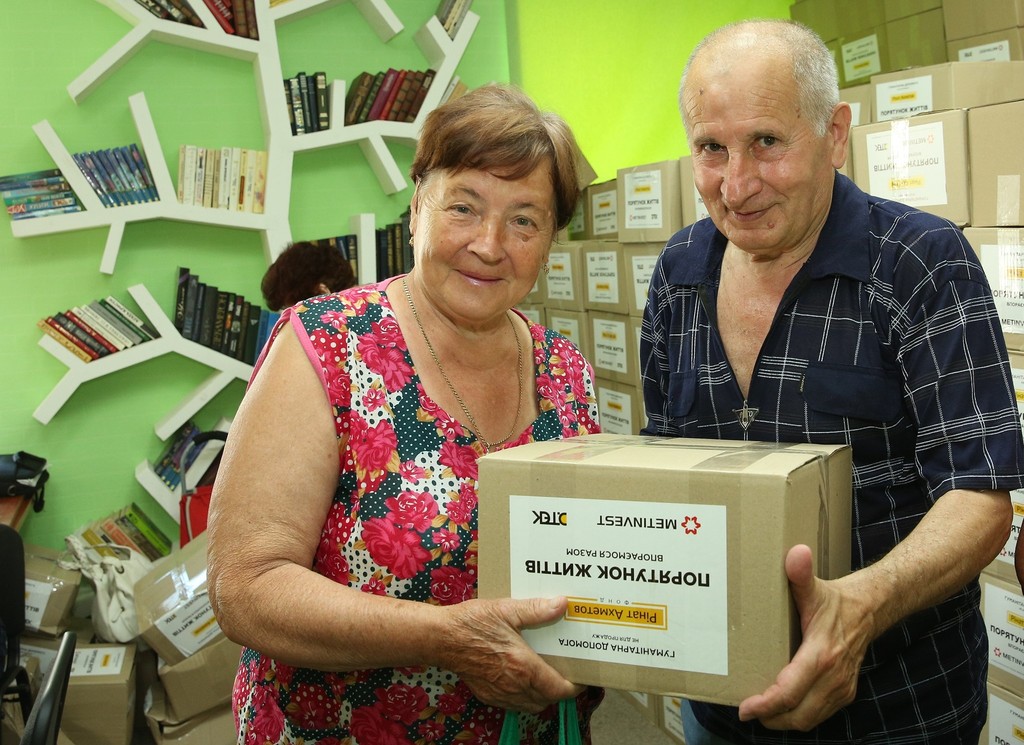