Kherson Shipyard (KhSY, Kherson, Ukraine), which is a part to Smart Maritime Group, the shipbuilding sub-holding company of Smart-Holding, formally floated out its RST27 design product carrier tanker. This is the first vessel in a series of complete tankers to be manufactured by the shipyard under its contract with SVL Group (Malta). The total contract price amounts to more than USD 50 million.

The ship is designed for the sea and combined-type ('river-sea') transportation of crude oil and oil products, including petrol, with no flash point limitations and with the cargo temperature maintained at 60 °С during the transportation. The tanker can handle simultaneous transportation of two cargo varieties.

Special requirements of oil companies have been taken into account in the design of the tanker, as well as additional environmental limitations of the respective ECO Project (ECO-S) class of the Russian Marine Register of Shipping.

'For the first time in the history of independent Ukraine, a serial complete tanker was constructed and floated out in our country. The shipbuilders of Kherson have completed their contractual obligations at a high quality level and ahead of schedule, and I am positive that this secures the prospects of new contracts for the construction of modern ships for our company,' said Vasiliy Fedin, the General Director of KhSY, at the formal floating-out ceremony.

'Construction of complete tankers is a strategic priority for Smart Maritime. In the short term, we are planning to strengthen our position in the niche of medium-tonnage shipbuilding and expand our market geography to the maximum. I am sure that the future of Ukraine belongs to the high-tech and science-driven industries. Shipbuilding must serve as a locomotive for the domestic metallurgy, machine-building and design bureaus,' said Alexandr Yurkov, the director of Smart Maritime Group.

Kherson Shipyard (KhSY) was founded in 1951.

The volume of KhSY production and services for 9 months 2012 amounted to UAH 293,473,000, which is more than double from the same period of 2011. The shipyard's portfolio of orders ensures its work load till the end of 2013.

Smart Maritime Group (SMG) is the largest shipbuilding holding company of Ukraine. It was founded in 2009 to manage the shipbuilding assets of Smart-Holding.

Smart-Holding is one of the largest investment groups of Ukraine with focus on the key industries of the economy, including mining and metals, oil and gas, shipbuilding, real estate and agriculture.
to news list Shipbuilding Share on Facebook Print NEXT PREV 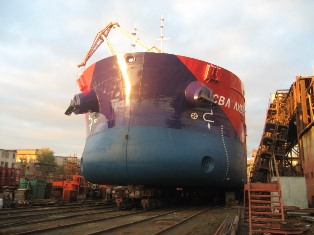